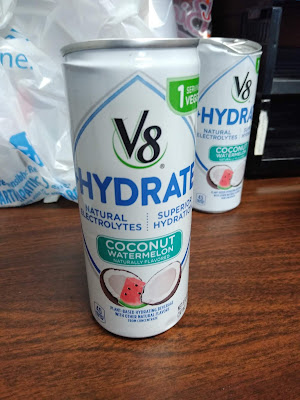 I had a coupon for this particular item and, since I am always trying (unsuccessfully) to at least cut back on the amount of soda I drink, especially at the office, decided to pick up 6 cans of it this morning. I had one after finishing my lunchtime walk and, after trying it, I'll say it was definitely interesting.

First of all, I had never even heard of sweet potato juice until reading the back of the can and finding out it is the primary ingredient in this drink. Heck, even now, I'm still trying to wrap my head around that because a sweet potato seems like such an unlikely thing to get juice from. But, I'll give the drink a thumbs-up for that regardless because it makes it pretty clear how you are getting the one-serving of vegetables the can advertises.

I'll even agree the drink is considerably healthier for me than my normal afternoon Mountain Dew. It has just 45 calories and a very small amount of sugar, none of which is added. Granted, it's a smaller can and that is likely playing a bit of a role in this. But, I'm still on board with it in that regard.

As far as taste goes, the jury is still out. I tried the coconut watermelon variety which, of my choices, seemed the most appetizing (to me at least) and, at minimum, it's a flavor that will take some getting used to. I didn't hate it. But, at least at the moment, I didn't like it as much as some of the flavors I've tried with V8 Fusion drinks.

Final Opinion: As I mentioned, the flavor is something that will take me a little bit of time to get used to and, even then, I'm not sure if I'll really ever truly enjoy it as much as other drinks. However, I do think this is a much healthier alternative to a can of soda so I'll still recommend it.