August 05, 2019
Synopsis: Mystery novelist Ariadne Oliver is helping a friend prepare for a kids' Halloween party when 13-year-old Joyce Reynolds tells her she once witnessed a murder. Since Joyce is known to be a compulsive liar, nobody believes her. However, later that evening, someone drowns Joyce in the apple-bobbing tub. Disturbed by the incident and partially blaming herself, Ariadne reaches out to long-time friend Hercule Poirot for assistance. 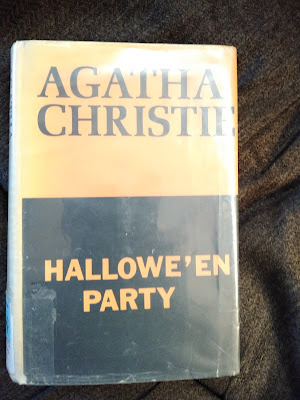 Review: My wife and I wound up spending a good chunk of last week binge watching the final season of Orange is the New Black and, because of that, it took me a bit longer to get through this book than I normally would have expected. I finally finished it yesterday and, overall, I was happy I read it.

When I first started reading this book, I thought the mystery was going to be a little too easy to solve. After all, Joyce was apparently murdered because she witnessed a murder so, in theory at least, the only thing I needed to do was figure out who else died.

This, however, turned out not to be the case. I had strong suspicions about one of the characters that wound up being correct. But, figuring out for certain who was responsible was a much bigger challenge than I was expecting. This is because there were actually quite a few people who recently died and, while they all seemed to be natural or accidental deaths, there was no way to rule them out. That, combined with another character who simply disappeared, made things much more difficult.

I also found I was very intrigued with a forgery case that kept being brought up throughout the mystery. I figured it had something to do with Joyce's death but wasn't completely sure how it fit in, especially when the book reveals the will was forged but contained the exact same information as the original (raising a question about why it was forged in the first place).

My only real complaint about the book is I really fail to see the point of having Ariadne in it. Other than being the reason Poirot gets involved with the case, she really doesn't contribute a whole lot to the overall plot. I'm disappointed by that because I feel it's a waste of a character that, in the later books, could have the potential to be a female equivalent of Captain Arthur Hastings but, instead, is only really mentioned a few times and usually in some sort of comedy-relief-like role.

Final Opinion: I would have liked to see Ariadne Oliver be more involved with the overall mystery investigation but, despite that, did wind up enjoying the book and would recommend it.