August 14, 2019
Synopsis: When Constable Hamish Macbeth makes a routine visit to the remote village of Stoyre, he senses something is amiss. The pub is empty and the residents, who seem to have become unusually religious, are closed lipped whenever he attempts to talk to them. He is determined to figure out why but, at the same time, also has to avoid being promoted/forced to leave his home in Lochdubh after solving a series of unrelated crimes ranging from insurance fraud to attempted murder. 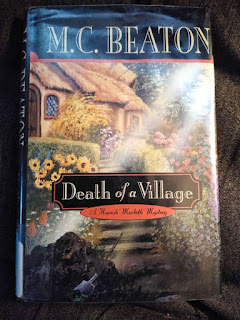 Review: Mostly because of all the time I spend at the ice rink, I can get through, on average, one book per week. However, every so often, I wind up finishing a book much quicker than that because I simply cannot put it down. This book falls into that category.

There were a couple things that really stood out for me when reading this book. The big one was definitely the main mystery surrounding Stoyre. Unlike many other books from this series, there was no obvious crime. Nobody had been murdered and, at least from all appearances, the people in the village were law-abiding and even deeply religious. Yet, from the time he arrived there, it was pretty obvious something was off. And, even when there was finally a crime (a house being blown up) and the villagers were obviously the ones behind it, the mystery as to why still remained.

Now, to be fair, when the book finally revealed the reason for the villagers acting that way, I did think it sounded a bit too much like something out of an episode of Scooby Doo! But, even with that, I thought the overall mystery was still compelling enough to make the book memorable.

Also helping the book were the various side investigations Macbeth kept ending up helping with, including a domestic dispute that wasn't what it seemed and a missing child case.  I found it amusing how he was able to figure out the answers so simply when his superiors weren't even remotely close and it did make me wonder just how he was able to dodge the promotion he dreaded.

Actually, let me add to that. In addition to wondering how he was going to avoid the promotion, I also am starting to find myself a little confused about why that promotion absolutely requires him to relocate. Other than his superior/nemesis, Chief Inspector Blair, wanting him in a position where he would be more invisible, the move honestly doesn't make a lot of sense. If anything, with all the crime Macbeth seems to have on his beat, it might be wiser to give him help and just call him in when a consultation is needed.

I am also finding myself somewhat interested in his strange relationship with his wannabe girlfriend Elspeth Grant. At first, I didn't think I would enjoy this budding new romance. But, I love how he always manages to say or do the wrong thing, whether it's insulting her footwear or holding hands (in a non-romantic way) with another woman. I think I actually like this relationship better than the one he had with Priscilla Halburton-Smythe.

Final Opinion: Unlike most of the other books in this series, there wasn't a murder (at least in the traditional sense). But, it wound up being a good mystery and a fun book to read.