Book Review: The Case of the Counterfeit Eye by Erle Stanley Gardner (1935)

August 12, 2019
Synopsis: When one of Peter Brunold's custom-made glass eyes is stolen, he hires lawyer Perry Mason because he feels someone plans to use the eye to frame him for a crime he didn't commit. When a wealthy businessman, Hartley Bassett, is later murdered and is found clutching Brunold's missing eye, Mason must figure out who the real killer is. Further complicating things is a missing witness, who the police and a brash new district attorney believe Mason is hiding. 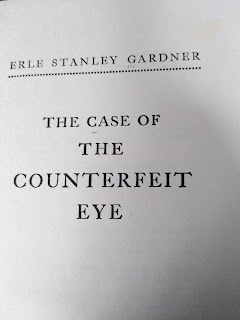 Review: After reading my first couple Perry Mason books, I found I was hooked. And, as a result of that, I did wind up checking out this book the last time I was at the library. Unfortunately, as it turns out, I didn't enjoy this book as much as I thought I would.

I think my biggest problem with this book isn't the story itself as much as it is the story when compared to other books from this series. Other than the part about the missing eye, there wasn't much about this story that was really any different than the other books I've read so far. Mason gets a client in his office and, in the course of helping that client, finds a dead body. And, since he seems determined to make his job harder than it needs to be, does something that (at least in my opinion) is kind of dumb and could potentially result in him going to prison.

Of course, not helping this book was the fact Mason was, once again, spending the majority of his time playing detective while the courtroom scenes were kept to a minimum. This was actually kind of ironic considering Mason himself, at the very beginning of the book, was complaining about not having a courtroom challenge.

To be fair, the murder mystery was a little bit of a challenge to solve and I didn't know, for sure, who the real killer was until the very end. And, I also have to admit, I was a bit puzzled by Mason's reasons for hiring an actress to pretend to be the missing witness (who was probably not the killer).

But, even with keeping that in mind, this book just seemed to lack something when compared to the others I've read to date. As a result, I am honestly a little hesitant to read further into the series.

Final Opinion: I will probably, eventually, give the series another chance, especially since this was the first time one of the books didn't live up to my expectations. However, after reading this book, I am also going to take at least a short break before checking out another one.