July 29, 2019
Synopsis: After successfully sleeping her way into the lead spot on a scandalous TV program, reporter Crystal French is brought back down to Earth after Constable Hamish Macbeth cites her for reckless driving. She intends to get her revenge by humiliating Hamish on TV. However, on the day she is set to conduct her interview, someone murders her and stages it to look like a suicide. 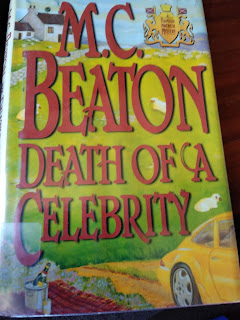 Review: Apparently, someone else discovered Hamish Macbeth recently because, the last couple times I've been to the library, this book wasn't available. However, I was finally able to check it out a few days ago and can honestly say it was worth the wait.

There were a couple things, in particular, I found I really enjoyed about this book. The main one (as should always be the case) was the mystery.

The thing I found intriguing about this case is the way there seemed to be plenty of people with a potential motive, ranging from people Crystal embarrassed on national television to those she was working with, but with no apparent opportunity to do so. And, there were others, such as Hamish's apparent new love interest, Elspeth, who didn't seem to have an apparent motive but, for some reason, just seemed like they would be potentially guilty of the crime as well. The list of suspects becomes even more muddled when there is a second murder that may or may not have connections to a drug dealer.

Another thing I found I liked about this book was how Hamish was actually given a longer leash this time around because of having a temporary superior, DCI Carson, who was willing to take advantage of the constable's talents, even if it meant going against protocol. I thought this aspect of the mystery was intriguing because it showed just how much potential Hamish would have as a detective if he wasn't restricted by his lack of ambition and desire to avoid a promotion.

I also enjoyed some of the side stories that came out of this book, especially Hamish's ongoing issue with his new dog, Lugs, and the animal's apparent appetite for Italian food. Stories like that, along with one toward the end involving a case of bad timing getting him into an unwanted romantic entanglement, keep the murder mystery lighthearted enough to be enjoyable instead of depressing. It's one of those things that keeps me coming back for more. Assuming, of course, the book hasn't already been checked out by someone else.

Final Opinion: This is an entertaining book with a very solid mystery. I would recommend taking the time to read it.