July 18, 2019
Synopsis: When typist Sheila Webb showed up for an appointment with the blind Miss Pebmarsh, the last thing she expected to find was the stabbed body of a mysterious, well-dressed man. In a panic, she flees the house and falls into the arms of a British secret agent, Colin Lamb, who calls his friend, Inspector Hardcastle, and ends up assisting with the investigation.
The murder case proves to be a baffling one. Miss Pebmarsh, who has not been at home most of the day, swears she doesn't know the man and did not make a call to hire a typist. On top of it, four of six clocks found in the room with the dead man did not belong to her and were likely either brought into the house by the victim or the person who killed him. When interviews with the neighbors shed no additional light on the case, Colin turns to his former mentor, Hercule Poirot, for advise. 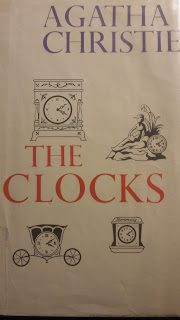 Review: When I checked out this book at our local library last week, I wasn't really sure what to expect from it. The description sounded interesting but, I've found Agatha Christie's later Hercule Poirot books have been a little hit-or-miss lately and, because of that, I wasn't as optimistic as I probably should have been. However, after finishing the book early this morning, I have to say this one actually turned out to be one of my favorites.

To tell you the truth, this actually surprised me a bit. Like many of her other later Poirot stories, the fictional detective actually didn't play a big role in this mystery book, other than a couple short cameos and, of course, his big reveal at the end.

But, unlike some of the other books that did this, it really worked this time around because, ultimately, Poirot was trying to prove he could solve the case without being involved with it. So, while I probably wouldn't want to see that happen too often, I was willing to give it a pass this time around.

I also liked how Christie told a good portion of this story from a first-person perspective, much like she did in earlier books. I've always thought that was the best approach when it came to murder mysteries like this one because the reader is learning the clues at the same time as the person investigating the crime and isn't getting too much information too soon.

As far as the mystery itself, I loved it. Overall, it actually turned out to be a very simple case. In fact, when Poirot revealed the killer, I was kicking myself a bit because it was so obvious, I probably should have seen it from the start. But, Christie had so much other stuff going on, from mysterious clocks (including one that gets stolen), to additional murders and even a surprisingly compelling Cold War spy story, it was easy for simple solutions to get lost in the shuffle.

In fact, since I wasn't sure if the Cold War spy plot had anything to do with the main murder mystery, I found myself questioning whether Colin's narrative was actually accurate or, as was the case in a previous Poirot book, the narrator would turn out to be the killer. It was definitely something that kept me intrigued throughout.

Final Opinion: I had some doubts, but this was an entertaining book with a pretty clever murder mystery. I enjoyed reading it even if Poirot's contribution was limited to just a couple chapters.