Book Review: Cat Among the Pigeons by Agatha Christie (1959)

July 09, 2019
Synopsis: Founded by Headmistress Honoria Bulstrode and teacher Miss Chadwick, Meadowbank School has become one of the most prestigious girls' prep schools in England. The school's reputation takes a hit, however, when some of its staff members are murdered and one of the students is apparently kidnapped with the motive possibly being related to valuable jewels that were smuggled out of a Middle Eastern kingdom days before a revolution broke out. At the request of one of the students, Hercule Poirot gets involved with the investigation. 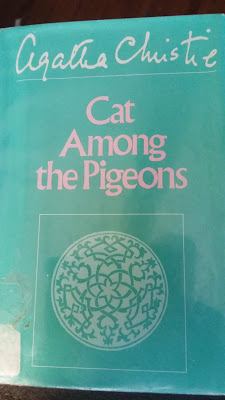 Review:  I started reading this book Sunday morning and, thanks mostly to waiting around at an ice rink for about 90 minutes, I was able to finish it yesterday evening. While the book started out OK and had a halfway decent plot, I honestly didn't like it as much as I thought I would.

My biggest problem with this book is the motive behind at least two of the deaths isn't much of a mystery. Normally, motive is one of the toughest things to figure out when it comes to a murder mystery and a big part of the reason I'll finish a book even if I am able to guess at who the killer is. This time around, the motive (the jewels) was pretty obvious and, along with that, there also wasn't much question as to where those jewels were hidden (I kept hoping that would turn out to be a red herring and was disappointed when it wasn't).

Because of that, it really wasn't that difficult to figure out who the killer was simply by the process of elimination. And, while Christie did, admittedly, at least attempt to throw in a curve ball by giving the killer an airtight alibi for one of the murders, there honestly wasn't anything about this book that really caught me by surprise, especially since there really weren't that many suspects.

Another dislike I had about this book was the same one I've had with other later Hercule Poirot novels, he's just not in it enough. Heck, he isn't even mentioned until the book is three-quarters of the way read, three murders and a kidnapping have occurred and the missing jewels have already been recovered. Quite honestly, if Christie didn't want to include Poirot until the very end anyway, why not just let the student, Julia, solve the mystery? I think that might have been much more interesting, especially if it meant her life was on the line.

Final Opinion: It's an OK story. But, I just wasn't a fan of the way it was told and would have probably enjoyed it more had the motive been a bit less obvious and the book had a couple surprise twists.