Book Review: The Case of the Howling Dog by Erle Stanley Gardner (1934)

July 22, 2019
Synopsis: When an agitated Arthur Cartwright offers Perry Mason a large cash retainer in exchange for helping him with his neighbor, Clinton Foley's, howling dog, Mason questions his wannabe client's sanity. And, when Cartwright sends him $10,000 in cash through the mail along with a will that leaves everything to his neighbor's estranged wife, Mrs. Foley, Mason begins to doubt his client even more.
However, when Clinton Foley is murdered and Mrs. Foley becomes the primary suspect, Mason realizes Cartwright was only planning ahead and does everything in his power to make sure the woman doesn't get convicted of the crime. 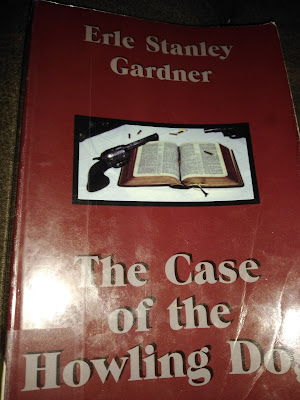 Review: My wife and I had some errands to run last week and, since we were near the library anyway, I decided to stop in and get a couple more books to read. I have had quite a bit of luck with Perry Mason stories and decided to stick with them. Once again, I was not disappointed.

I think the thing that really impressed me about this book is the way it managed to make the case seem much more complex than it should have been simply by having so many additional elements. This included Foley living in sin with Cartwright's estranged wife, the woman apparently running off with her real husband just before the murder, a dog that may or may not have howled and a Chinese chef that was reported to immigration shortly before the murder occurred. As a result of that, even though Foley's real wife was spotted entering and leaving the house at around the time the murder was being committed, there were so many other possibilities.

As has been the case with other Perry Mason books I've read, I liked how the lawyer kept tempting fate by pulling out all stops to protect his client, even if it meant possibly crossing a line that might get him in just as much trouble as the person he was defending. Watching him do something that seemed shady and then later have him explain his justification and how he was just shy of breaking the law was fun to read.

In the case of this particular book, one thing that kept having me scratch my head was the way Mason kept insisting his client get acquitted by a jury even as the prosecutor was willing to drop the charges against her. It was something that, at the time, didn't make a whole lot of sense (even as he tried to explain his reasons) but did wind up playing a role later in the book.

My favorite part of this book, however, had to be the ending, when Mason summarizes the thought process he went through in defending his client and drops an unexpected bombshell about who he thinks really killed Clinton Foley. It was definitely something that caught my attention and made me glad about my reading choice.

Final Opinion: This is an entertaining book with a few surprises. I would recommend taking the time to read it if you get a chance.