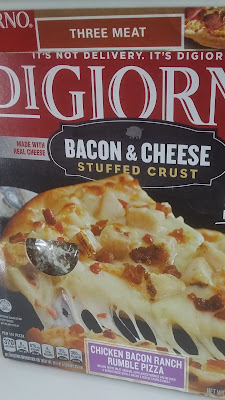 My wife and I both had places we needed to be yesterday evening and, since neither of us thought to get dinner started in advance, decided to have frozen pizza. She had seen this particular one when out grocery shopping a few days ago and mentioned it to me. So, when I stopped at the same store yesterday evening, I wound up buying it. Overall, I was happy with the purchase.

We wound up making this on our pizza oven when I got home from the store and I found it exceeded my expectations. The stuffed crust probably could have used a little more bacon (it was mostly cheese). But, it still ended up being enjoyable and, at minimum, was good as some of the stuffed crust pizzas we've purchased from local restaurants for much more money.

It also proved to be much more filling than I was expecting it to be. Normally, a pizza like this would barely be enough for two of us. But, I was getting full after just two slices and needed to wait a while before having more. And, as far as taste goes, I also had no complaints. It wasn't too spicy (a problem with some pizzas) or too bland.

My only real complaint is one I have with most frozen pizzas,  I do wish the pizza had a few more toppings on it. We had the Chicken Bacon Ranch variety and I thought the meat was in short supply. It didn't really detract from the taste or anything. It's just at least one of the slices I ate wasn't much better than a cheese-only pizza.

Final Opinion: It's still a frozen pizza and, because of that, does skimp in some places in an effort to be affordable. But, overall, I did enjoy this purchase and would recommend it.