June 19, 2019
Synopsis: Aided by technology that will allow them to travel anywhere in the solar system, a group of 10 brash friends decide to build spaceships and seek their fortunes in space. The endeavor proves fatal to some and has a profound change on the others. 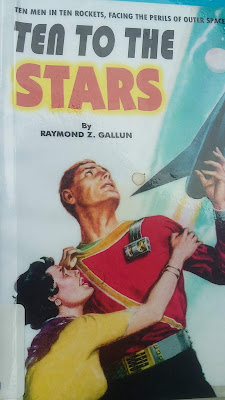 Review: My decision to check out this book a few days ago came from a somewhat unique inspiration. Our downtown area has a bunch of murals painted on the sides of the buildings that provide a snapshot of the city's history. As it so happens, I decided to walk to the library and, as I did this, I happened to pay a little closer attention to the mural paying tribute to Raymond Z. Gallun as an author who was born here in Beaver Dam, WI.

I'm actually not a huge science fiction fan, especially when it comes to older books. But, I was intrigued enough to see if the library actually carried any of his books and ultimately ended up checking this one out. I finished it yesterday evening and, after some reflection, I realized I did enjoy reading it.

One of my biggest concerns about classic science fiction is the material, more often than not, has a tendency to be a bit dated. And, when I checked out this novel, which was written before man even made it to the moon, I was fully expecting that.

However, as it turns out, that wasn't really the case. While I wouldn't go as far as to say his book was scientifically accurate, he did keep the expectations down a bit. In other words, the heroes in the book didn't find green aliens or Earth-like conditions in the places they visited. The worlds were correctly hostile environment-wise and, if they did come across a sign of alien life, it was mostly in fossil form.

Some of the adventures they found themselves on, ranging from being held hostage on Mars to nearly getting blown up by an ancient bomb, also proved to be entertaining. And, a big part of that was because the circumstances they ran into weren't anything that was overly far fetched.

My only real complaint about this book (other than it was a little on the short side) is the misleading title. While there were 10 men mentioned in the book, it really only focused on about five of those men. In fact, two of the men don't even make it off Earth. In fact, I kind of wished Gallun would have simply changed the overall story to eliminate most of the extra space travelers from the start so he didn't have to waste pages on characters who don't even have a major part of the overall story.

Final Opinion: I admittedly had some doubts about this book when I started reading it, mostly because of my less-than-exciting experiences with other classic science fiction stories. However, while there were a couple things I would have changed about it, this turned out to be an entertaining book that I did wind up enjoying.