June 29, 2019
Synopsis: When bookstore owner Claire Mallory's English professor husband was killed in a car accident, the fact he was having an affair with one of his students was kept under wraps. But, when a local romance writer publishes a new book that is essentially a tell-all about the faculty at a local college, her husband's secret, along with others, is revealed. When the author is murdered shortly after this discovery, Claire and her teenage daughter are potential suspects. 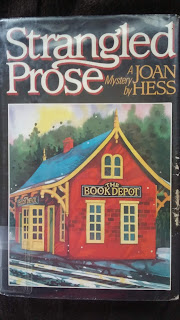 Review: When I was at our local library a couple weeks ago, I once again decided to pick a book out at random and, this time around, I quite literally made the choice by judging the book by its cover. Unfortunately, this one turned out to be a disappointment for me.

For example, I wasn't a big fan of Claire as the narrator. This was actually a little bit of a surprise because I usually like murder mysteries that are told from a first-person perspective. But, I think the fact she always seemed to try to keep things a little too light-hearted rubbed me the wrong way. A person was murdered, Claire and her daughter were suspects and her husband was cheating on her. I think it would have been OK for her to be much more angry when writing certain parts of the story.

The mystery itself was also kind of a disappointment. It wasn't overly difficult to figure out, via the process of elimination, who the killer was. In fact, I pretty much had it figured out about halfway through the book. On top of it, Claire doesn't even "solve" the mystery. Instead, she walks into a trap set by the killer and that person confesses to her (spending way too much time filling Claire in on the details rather than just following through on her well-executed trap). In other words, even though she referenced the literary character on more than one occasion, she wasn't exactly giving Nancy Drew a run for her money.

I also found I wasn't a big fan of the killer's motive, which supposedly was primarily centered around what her deceased husband did. It was a revenge plot that honestly didn't make a whole lot of sense considering Claire was essentially a victim too. It's not like she knew about the affair and/or was driving the car when he died.

Final Opinion: I think this story had some potential but, ultimately fell flat. It's a book that would have been better if it were told either from a third-person perspective or maybe from another character's (her daughter's?) point of view and had a "detective" who was actually good at detective work and didn't need the killer to trap her and confess.