June 24, 2019
Synopsis: Already a little depressed about spending Christmas alone in a community that doesn't openly celebrate the holiday, Constable Hamish Macbeth reluctantly helps an unfriendly recluse find her missing cat while trying to locate Christmas decorations that were stolen from a neighboring village. 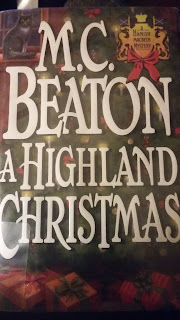 Review: Normally, I wouldn't even consider checking out a Christmas-themed book in the middle of June (especially when the weather already hasn't been summer-like). But, it was the next book in the Hamish Macbeth series and, not wanting to read it out of order, I made an exception. Unfortunately, after finishing the book last night, I kind of wish I would have just left it on the shelf.

Let me start out by saying I didn't hate the book. It's just, when I read a series like this one, I do have some certain expectations. In this particular case for example, since Macbeth is known for solving murder mysteries, I was sort of expecting him to be solving one this time around too. And, yes, I know the book's description pretty much told me that wasn't going to be the case. But, I figured maybe it was just leaving out the best part.

As a result of all of this, instead of getting a mystery that had me racking my brain, I got a book that reminded me a bit too much of a Hallmark Christmas movie with Macbeth being the hero who essentially brings Christmas to Lochdubh while befriending a reclusive neighbor and even helping a little girl.

I also found I was disappointed by Macbeth's failed romance with the new school teacher, mostly because the book never really gave her any depth. It honestly was hard for me to feel sorry for her when all I really knew about her is she was a teacher and developed a crush on Macbeth after only a couple casual dates. Plus, I'm still not sure if Macbeth only thought of her as a friend because he was clueless about her feelings toward him or if he was doing so on purpose (the book hints at the latter early on but never really clarifies it later).

Final Opinion: It's an OK holiday book. But, as a mystery book, it does lack something and I wouldn't recommend reading it in any month other than December as a result.