June 22, 2019
Synopsis: When the United States is forced to surrender five Appalachian states to an unknown group calling themselves the Conquerors, a British scientist and two companions travel into the newly-abandoned region in search of answers. 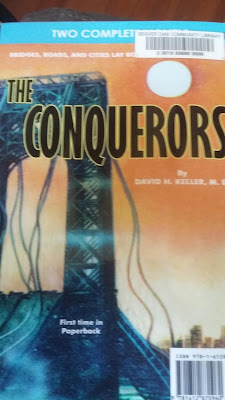 Review: I ended up checking out this book as part of a pairing with another book, Ten to the Stars. I wasn't really sure what to expect from this one but, mostly because I enjoyed the latter, I was optimistic. Unfortunately, I just didn't enjoy this one as much as I hoped I would.

I actually liked the first part of this book, mostly because I enjoyed the mystery surrounding the mysterious Conquerors. I wasn't sure if they were aliens or something else but was curious why they seemed so interested in that region of the country. I also found myself wondering if maybe they were bluffing, especially since they were small in stature and seemed to want to avoid a violent confrontation.

As a result of that, I did wonder what the eventual expedition into the abandoned region would bring. But, as it turns out, the book kind of went downhill from their.

I think my biggest problem with this book is, as it took the time to explain who the Conquerors were and their way of life, they seemed to be less interesting. A large part of the reason for this is they just never seemed all that threatening. Sure, they enslaved humans and were threatening to wipe out all human life on the planet. But, since none of their threats seemed overly imminent, there just wasn't any suspense to back it up.

Heck, even when it came to the heroes' grand escape plan, they seemed to have all the time in the world to execute it. Let's just say, for a race that was supposed to be much more intelligent than humans, they sure seemed to be kind of dumb when it mattered.

Final Opinion: The book starts out with a decent mystery but, as it progresses, loses steam. It still managed to be OK, but could have been better with a bit more suspense.