April 19, 2019
Synopsis: If there's one thing Constable Hamish Macbeth can't stand, it is bullies. So, when newcomer braggard Randy Duggan challenges him to a fight, Macbeth decides to accept the challenge even though it could cost him his job and possibly even his health. When Duggan doesn't show up for the fight and is later found murdered, Macbeth, a potential suspect himself, must find out who was tormented enough by Duggan to want to kill him. 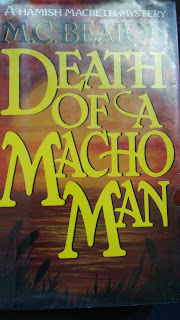 Review: Even though I don't need to spend as much time as the ice rink now that the ice show is over. But, I have still been making an effort to find time to read nightly. This includes this book, which I finished last night and can say I definitely enjoyed.

The thing that surprised me about this book was the mystery wasn't as easy to solve as I originally thought it would be. I had a suspect in mind from almost the beginning and, ultimately, my suspicions proved to be correct. However, until Hamish figured out the connection, I had no idea why my suspect would want Duggan dead.

Further complicating things was the second murder. That one honestly threw me for a loop because the victim had a connection with Duggan but, at the same time there was evidence the second murder may not even be related to the first one.

At first, I wasn't a fan of Hamish ultimately being forced to investigate on his own, putting his job on the line. This is because it is something that has already previously happened in the series and I figured it would get repetitive. However, between him having his own life potentially at risk and being forced to change his appearance so he couldn't be found, I did think there was just enough uniqueness to keep that part of the story interesting.

I'm still a bit undecided about the decision to give him another assistant at the very end of the book, mostly because I'm not sure if that was something that was just for this story or will carry on into other books. I guess I'll withhold judgement on that until I find out.

Final Opinion: This was an interesting book that had enough twists to keep the murder mystery from becoming predictable. I would recommend it.