April 01, 2019
Synopsis: The village of Drim is normally a quiet, largely forgotten part of Sergeant Hamish MacBeth's beat. However, when the young, handsome and single Peter Hynd buys a house there, the local women fall head over heels for him. When Peter goes missing, Hamish suspects the worst, especially when one of the local women is found dead under suspicious circumstances. With his superiors convinced Peter just moved away and the woman's death was accidental, Hamish puts his career on the line by investigating without authorization while, at the same time, trying to save his rocky relationship with Priscilla Halburton-Smythe. 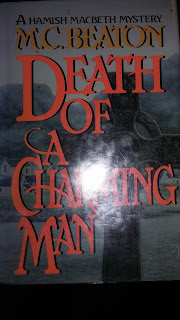 Review: It was probably because of the weather, but I found I wasn't overly enthused with doing some of the chores I had planned on doing this past weekend and, instead, found myself reading this murder mystery. Fortunately for me, this turned out to be a really good one.

I've read enough murder mysteries (and seen plenty of movie mysteries as well) to usually have at least a vague sense of who the killer is or, at minimum, am able to narrow it down to two or three potential suspects. This one, admittedly, had me stumped from front cover to back.

Part of the reason for this is there were so many potential suspects. Pretty much everyone in Drim has a reason to want Peter dead, whether it was a jealous husband (or group of them) to a scorned lover. Heck, even the 12-year-old daughter of one of his mistresses seemed just suspicious enough to be a potential killer too. And, when they found the little girl's mother dead, that just added to the mystery.

Adding to the mystery was the fact Hamish really didn't know for sure Peter was dead. There was no body and all the evidence pointed to him simply deciding to move away from the town (possibly because he believed his life was in danger) and sell the house. As a result, while I trusted Hamish's gut when he believed the man was murdered, I did half expect to see him pop up alive and well at some point.

I won't go into too many details to avoid spoilers, but I also have to applaud the book for successfully duping me with a couple red herrings. Normally, I can spot those from a mile away. But, in this case, the book had me suspecting two separate people who wound up being completely innocent (or, at least as innocent as anyone in that town could be).

The part about Hamish and Priscilla was also interesting to read, mostly because the book didn't sugar coat their ongoing relationship issues (especially her efforts to get him to move away from Lochdubh and make something of himself to please her father) and, as things continually got worse, I found myself wondering if/how they would remain a couple. Again, I won't give spoilers, but I was actually pretty surprised with the route the book ultimately takes with that.

Final Opinion: This was an interesting murder mystery that I found difficult to put down once I started reading it. I would recommend taking the time to read it for yourself.