April 26, 2019
Synopsis: Police detective Perry Trethowan is embarrassed by his eccentric family and has been estranged from them and the family estate since a falling out with his father years ago. However, when is father is murdered while pleasuring himself using a Strappado-style torture device, Perry is forced to return to his ancestral home and face his family while helping the official investigators figure out who the killer is. 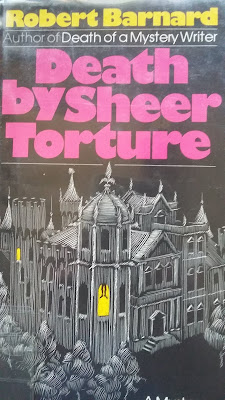 Review: After reading primarily Agatha Christie and M. C. Beaton murder mysteries the past couple of months, I decided to change things up a bit the last time I was at the library and grab something by a different author. I faintly remembered reading another novel by Robert Barnard (though I couldn't tell you which one or anything about it) and, not remember if I enjoyed it or not, decided to give this one a try. After finishing the book last night, I am a bit undecided.

To tell you the truth, I almost gave up on this book after a couple chapters. Barnard's writing style is a little different than what I'm used to reading (as I told my wife, he seems to ramble a bit) and, because of it, I was finding it hard to get interested. However, I stuck with it and it wound up being better than I thought.

I think the thing that intrigued me most about this book was Perry Trethowan himself. He was the hero in the book but I found myself sincerely disliking him. His hatred toward his family just seemed unjustified. Yes, they were eccentric. But, overall, they were pretty much harmless and there was nothing about them that made me think they deserved his hostility.

In fact, I'm not even convinced his father necessarily deserved his hatred too. Sure, there's evidence (at least in Perry's eyes) the hatred was mutual. But, based on how he acts toward his extended family, I do have my doubts.

The fact I didn't like the main character wasn't necessarily a bad thing, however. Instead, I think it did add to the overall story because, at times, I found myself wondering if maybe he was secretly the one who killed his dad. This was, of course, before I learned he is the protagonist in some of Barnard's other mysteries.

Unfortunately, I thought the ending of the book was a bit unfulfilling. As I got further into the book and some of the family's secrets were revealed, it became increasingly obvious who the killer was and, as a result of that, the "big reveal" was pretty underwhelming. I did like the surprise twist involving the rightful heir to the property. But, even with that, it just left me disappointed.

Final Opinion: Ultimately, it did end up being an OK book, mostly because there is part of me that does like a protagonist that isn't necessarily likable. But, I just didn't like this murder mystery as much as mysteries from other writers.