March 07, 2019
Synopsis: If it weren't for his money, Andrew Trent's family would have nothing to do with him. The elderly man is notorious for his pranks and isn't afraid to cross lines that could offend or even injure people. When his family members travel to his house believing he is finally on his death bed, they are chagrined to learn he is in perfect health and, because of the weather, must tolerate his jokes for an extended period of time.
Their torture comes to an end when Trent falls out of a closet with a knife in his chest. Was it a prank gone wrong or was he murdered? And, if he was murdered, was it for his money or did he finally push somebody too far? It is up to local constable Hamish Macbeth to figure that out. 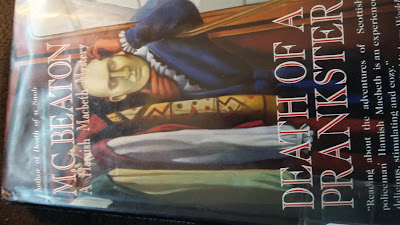 Review: Between ice show rehearsals for my oldest daughter and a dance competition for her younger sister, I am planning on having a lot of time to read the next couple weeks. As a result, I visited the library and stocked up on some books. This included this one, which I finished last night.

Other than one or two minor things, I have pretty much enjoyed every Hamish Macbeth book I have read. And, while I do still have some concerns the books will eventually become stale, I did find I enjoyed this one as well.

The mystery surrounding Andrew Trent's death was actually a little more complicated than I was expecting, mostly because there were multiple potential motives ranging from inheriting his money to simply being upset with him to the point someone might have murdered him in a blind rage. And, while the whole accidental death theory did seem unlikely, it was plausible enough to be considered. On top of it, there seemed to be a new favorite suspect almost every chapter.

I do pride myself in being able to solve a mystery like this before the detective does and, with that in mind, will admit I failed miserably at it. Ironically, I did guess correctly at the motive (which is normally the one thing I do get wrong) but guessed at the wrong suspect(s).

The funny thing is, as I progress through this mystery series, I do find myself growing less interested in Macbeth and much more interested in his love interest Priscilla Halburton-Smythe. Even though Hamish gets the credit (which he ends up giving to one of his supervisors), she is becoming a big part of the reason he is solving the cases and, in this case, is probably the sole reason the truth was revealed. It makes me wonder if maybe Beaton should have had a spin-off series of mysteries with her as the main protagonist. In fact, the fact she did all the work and got none of the credit is probably the only complaint I have about this book.

Final Opinion: It's a good mystery with some fun characters and a few interesting twists and turns. I would recommend it.