February 19, 2019
Synopsis: Feeling under the weather and facing the prospect of spending Christmas alone, Hamish Macbeth reluctantly agrees to accompany one of Priscilla's friends, Jane Wetherby, to her health farm and investigate what she believes were attempts on her life. While he is doubtful the "attempts" were anything more than accidents, Hamish quickly learns Jane isn't very popular with her highly conservative neighbors and does think her life is in danger. However, when a body is discovered, it isn't Jane. Instead, it is one of her guests, the snobbish Heather Todd. 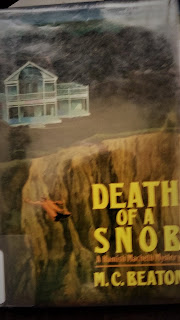 Review: My wife and I had a lot of time to kill this past Sunday while waiting for our youngest daughter at what was essentially a day-long dance camp. As a result of that, I managed to read both Death of a Hussy and this book with plenty of time to spare.

So far, I have been pretty impressed with M. C. Beaton and her character Hamish Macbeth. However, this book did leave me a little disappointed.

I'll start out by saying I did find I liked the overall mystery, mostly because it opened up a fairly wide range of scenarios. For one, since the victim was wearing Jane's clothes at the time, it was very possible the killer struck believing he/she was murdering Jane. But, since Heather herself wasn't exactly the nicest person in the world, it was also very possible she was the intended victim all along. This meant the killer could be just about anyone.

Not to mention, since there seemed to be no evidence pointing to murder in the first place, it was possible her death was accidental (though I thought this was highly unlikely considering this was a murder mystery).

Unfortunately, while I liked the overall mystery, I thought the way the book ended sort of ruined the whole thing. Basically (while trying not to reveal too much), after accusing someone and being completely wrong, Hamish learns who the killer is almost by accident and with a lot of help. And, rather than the dramatic big reveal I've grown accustom to when reading murder mysteries, the book commits multiple chapters to finding a way to prove that person committed the crime only to resort to tricking that person into confessing.

As a result of this, I just thought this book lacked something, at least compared to the other Hamish Macbeth books I've read. I didn't hate it. But, I definitely didn't like it as much as the others.

Final Opinion: Of the six Hamish Macbeth mysteries I've read so far, this one is my least favorite. I just hope it is a fluke and not a sign of things to come.