February 18, 2019
Synopsis: Maggie Baird became a wealthy woman by being a mistress for a series of rich men. However, after a love affair left her heart broken, she let herself go and now lives in Lochdubh with her cancer-survivor niece Alison Kerr. Determined to regain her former glory, Maggie undergoes a transformation that involves cosmetic surgery and other expensive treatments. She then invites four men from her past in an effort to get one of them to marry her for her money. However, her plan goes awry when she is killed in a car fire. The official investigators believe it was an an unfortunate accident. However, constable Hamish Macbeth believes she was murdered. 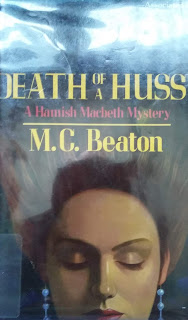 Review: My youngest daughter had a dance event all day yesterday and, since there wasn't much else to do while hanging around the hotel, I made sure to have a couple books with me, including this one.

I've been reading Hamish Macbeth mysteries for a short while now and, so far, they have continued to impress me. This one was not an exception to that.

Normally, I'm not a big fan of a lot of build up leading into the actually mystery. However, I thought the early chapters of this book, involving Hamish being sent to a different town and the citizens of Lochdubh staging a crime wave to get him back, were entertaining. That lead-in also did a good job of introducing the reader to the victim and her niece. And, while I did think the part about Hamish becoming the niece's secret driving instructor was dragging on a bit, it did serve to make me wonder if maybe she wasn't quite right in the head.

The mystery itself was also entertaining, mostly because the book does a good job of setting up Alison as the primary suspect while keeping a few others in the picture as potential killers as well. As it turns out, I was actually able to figure out who the killer was. But, my guess about that person's motive was way off and I was pleasantly surprised by the killer's reasons.

My only real complaint about the book was I did think it was a bit on the short side. It wasn't a big deal, but there was plenty of room to add more investigative detail to balance out the long introduction. Fortunately though, the overall book was decent enough to make up for that.

Final Opinion: This is a fun and interesting murder mystery that I did enjoy reading. I would recommend it if you are looking for something to read one rainy afternoon.