This Cat Sure is Spoiled 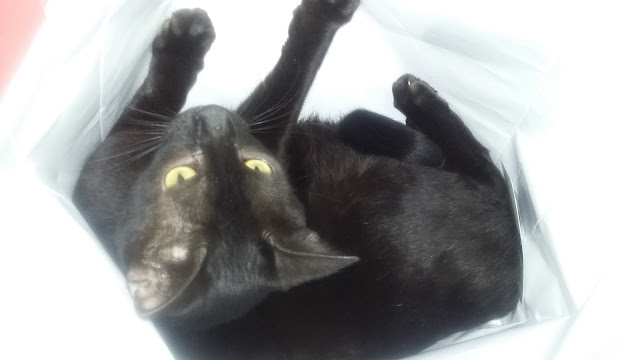 Ever since my wife and daughters first brought Echo home a couple years ago, it has been like having another kid in the house. This includes the 2 a.m. feedings I thought were finally over.

The past couple of months, however, things have been a bit different. He still likes to wake us up (with as much noise as possible). But, he hasn't been hungry.

At first, we had no idea why he was doing it. He wouldn't touch the food we gave him, he wouldn't play if we tried to play with him and he didn't want to get in our bed or go in either of the girls' rooms.

My wife finally figured it out a couple weeks ago. After I tried, unsuccessfully, to get him to settle down, she got up with him, carried him into the living room and rocked with him on the couch (holding him like a baby and rubbing his belly) for about 10 minutes. After that, he played with his brother, Mouse, a few minutes then crawled into our bed and went to sleep.

This has now become a thing with him. He'll wake one of us up around 2 a.m. almost nightly and it seems to be for the sole purpose of having one of us sit with him and rub his belly until he's ready to go to sleep. And, it has to be on the couch. He won't let us put him in bed with us and try to rub his belly there.

At this point, I guess I should be grateful it's only for the 10 minutes and he lets us sleep after that. Otherwise, I'd probably be pretty darn exhausted by now.
animals cats fur babies pets