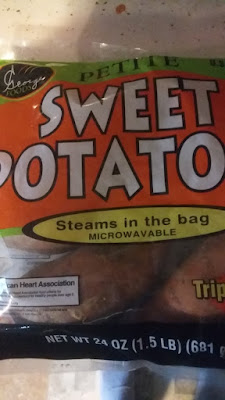 I had originally planned on making chili in the slow cooker yesterday. But, I realized I didn't have enough time at lunch to do everything I needed to do and, calling an audible, wound up picking up a ham steak instead. I needed something to go with that and, after some consideration, picked up a bag of these sweet potatoes.

I'm actually not a big sweet potato fan. However, my wife loves them so, on occasion at least, I'll pick some up for us. The thing I found I liked about this particular brand, however, was the fact I could make them, in the microwave, without taking them out of the bag. And, since they were on sale, I thought that convenience would make them worth the money.

I did wind up making these last night as planned and, cooking wise, it was as easy as I anticipated. It took about 8 minutes in our microwave and the potatoes were ready to be eaten (the ham steak was done by then too).

As far as taste goes, as I said, I'm not a big sweet potato fan so I can't say much more than they tasted like sweet potatoes. However, I do find I prefer fresh sweet potatoes to canned and these were fresh enough to help with some of that. At minimum, I did make it through one of them while my wife had seconds. There were some leftover too, so I wound up getting my money's worth as well.

Final Opinion: My personal bias aside, I do think this was a worthwhile purchase. I loved the convenience the steaming bag offered and, as I said before, fresh sweet potatoes are definitely better than canned or frozen. As a result of that, I would recommend this item.