October 29, 2018
Synopsis: Artist Amyas Crale is poisoned and his wife, Caroline, commits suicide after she is convicted of the crime and incarcerated. Sixteen years later, their daughter, Carla, believing her mother was wrongfully convicted, asks Hercule Poirot to re-open the case. Poirot agrees to take the case and, since all physical evidence has been erased by time, focuses on the witnesses who were there the day Amyas died. 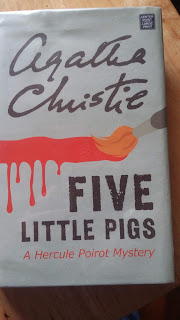 Review: I picked up this book at our local library a few weeks ago and, despite not having as much free time for reading as I would prefer, managed to finish it late last week.

Overall, I have to say this one made my list of favorite Hercule Poirot novels, mostly because the sixteen-year time lapse between the murder and his investigation made this case a little more challenging than some of the others he's been involved with. He had to solve the case based solely on people's memories of the crime with no access to the crime scene or physical evidence.

On top of it, even if the sixteen years hadn't elapsed, it was already a difficult case. Amyas was seeing another woman, Elsa, who he publicly said he was leaving his wife for. Caroline also confessed to stealing the poison and was the one that brought him the beer believed to have been spiked with the poison. She put up no defense at trial and even wrote a letter to her sister that sounded a lot like a confession.

In fact, just about the only other person who seemed to have any sort of motive would have been Caroline's half-sister, Angela, who hated Amyas and may have committed the crime in defense of her sister's honor. But, that scenario didn't make a lot of sense since she would likely have confessed rather than let Caroline go to prison.

As a result, I have to admit, I was stumped as to who the killer would turn out to be. The witness stories had holes in them, and even a few lies. However, I didn't have any idea who Hercule would point the finger at. And, considering I am usually good at pointing out the killer (even if I don't know how or why they did it), I have to give this book points for that.

Final Opinion: As I said, this book had a solid mystery and, because of that, made my list of Hercule Poirot favorites. I'd recommend it as a result.