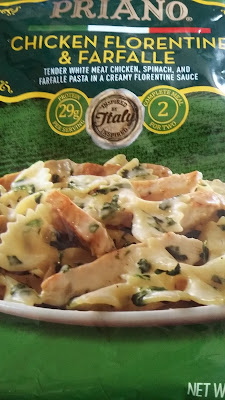 It had been a long while since my wife and I made a trip to our local Aldi store (we like Aldi, but it's hard to justify going there on a regular basis when we have two grocery stores within a few blocks of us). But, they recently completed some new renovations so we decided to check them out this past weekend.

To be honest, the renovations didn't really excite us all that much. The aisles were wider but their grocery selection seemed a bit thinned down (or, at very least, it was more difficult to find items we were interested in buying). As a result, we didn't buy nearly as much as we were expecting to purchase. However, while we were walking through the store's freezer section, I saw these dinners and, since the $4.99 price seemed reasonable, decided to purchase a couple of them.

My primary reason for this purchase was my wife and I have some week nights when things are really hectic and we don't get an opportunity to sit down and eat dinner together until the kids are getting ready for bed. On those nights, convenience is very important to us and I liked how this could be made either on the stove or in the microwave without a bunch of complicated steps. All we had to do was open the bag, pour the contents in a frying pan or microwave dish and cook it.

My biggest concern about this dinner was quantity. I've purchased plenty of similar products that advertised themselves as "family" dinners that were barely enough for two people. This one only advertised itself as a dinner for two and, since the bag looked a little small, I was a bit skeptical about that. In fact, I purchased the second one because I honestly believed we would need to make it too.

As it turns out, that was not a problem with this dinner. Even when my wife was making it, it didn't look like it would be enough. But, the pasta dish was surprisingly filling and, while we didn't have any leftovers, we also didn't need to make anything extra.

Taste wise, I thought this was OK. The seasonings gave the pasta a good flavor without the dinner being over-seasoned or too salty (as is the case with plenty of other dinners like this). I wouldn't say it was as good as a dinner from a restaurant or home-cooked meal. It was, however, more than adequate given the price and convenience.

As is usually the case with dinners like this, the chicken quantity was definitely lacking and my wife and I had to ration it to make sure each of us got some of it. However, once again, given the price and the convenience, it was adequate enough.

Final Opinion: This was a easy-to-make dinner option that didn't really impress me but also didn't disappoint me either. At $4.99, I do think I would purchase it again and might try some of the other varieties from this brand in the future.