Book Review: Murder in the Mews by Agatha Christie (1937)

July 10, 2018
Synopsis: A short story collection that has super detective Hercule Poirot investigating two murders, solving the theft of valuable government papers and trying to prevent a murder while he's on vacation. 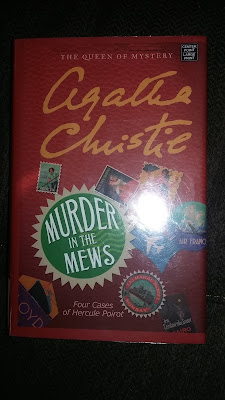 Review: I picked up this book at our local library a couple weeks ago and, thanks to my daughter skating once again (meaning I have hours to kill at the ice rink), I was able to get through it relatively quickly.

With some exceptions, I like Christie's Hercule Poirot novels and was intrigued with the collection of short stories that were, in essence, offering four mysteries for the price of one. After getting through the book, however, I did find I wasn't as impressed as I thought I would be.

This is mostly because Poirot is a detective that has a set process that requires the reader to be patient. In short story form, I just felt as though his process was a bit rushed. In addition, some of the supporting characters (something that is usually Christie's strength) just seemed as though they didn't get the proper attention and many weren't overly interesting as a result of that.

This was especially true of the final short story "Triangle at Rhodes," which didn't even bother letting Poirot solve a mystery (he just witnessed the murderer) but even the mysteries I did like, such as "Dead Man's Mirror," just seemed to lack something and probably would have been better had Christie fleshed them out and turned them into a full novel.