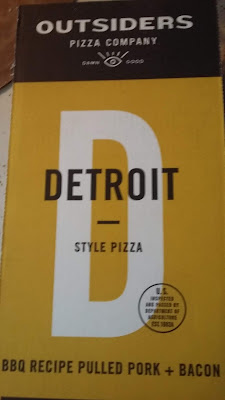 My wife was running some errands yesterday afternoon and, since she had to stop by the grocery store anyway, decided to pick up some frozen pizzas for dinner. We had never had this brand before and was interested in something a little different so she brought home the BBQ Recipe Pulled Pork & Bacon variety.

To tell you the truth, my wife probably enjoyed this pizza a lot more than I did. While she likes a variety of toppings and sauces on pizza, I am much happier with something a little more basic and, while I won't say I hated the pork and barbecue sauce, it really wasn't my thing. That being said, there were some things I did find I liked about this product. 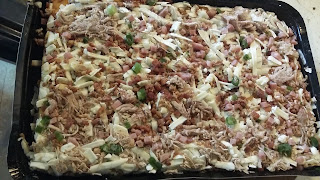 One thing, in particular, I found I did like about this pizza was the deep-dish crust. I've had this with some other frozen pizza brands but, more often than not, haven't been overly impressed with it. This one came out just the way I prefer it, a little crispy without being hard.

The pizza also, admittedly, had a lot of toppings on it. Most frozen brands skimp on those, especially meat, but I thought this had a reasonable amount on it. This, combined with the thicker crust, made the pizza much more filling than most frozen pizzas we've purchased and we had a good chunk of it leftover as a result.

My only real criticism of this pizza (other than the variety) is we couldn't make it on our pizza oven. This, in itself, isn't a huge deal. But, it did mean it took considerably longer to make this pizza (especially since it takes 15 minutes to preheat our oven) and, because of that, it isn't a great choice for nights when we choose frozen pizza because we have something going on and it is convenient. It, instead, would be a better choice for a not-so-hectic night. But, if we are having pizza on a night like that, I normally would prefer homemade.

Final Opinion: Because it isn't as convenient as other brands, I'm not sure this is a brand I would buy very often. However, I wouldn't mind trying another one, assuming it had more traditional toppings and sauce.