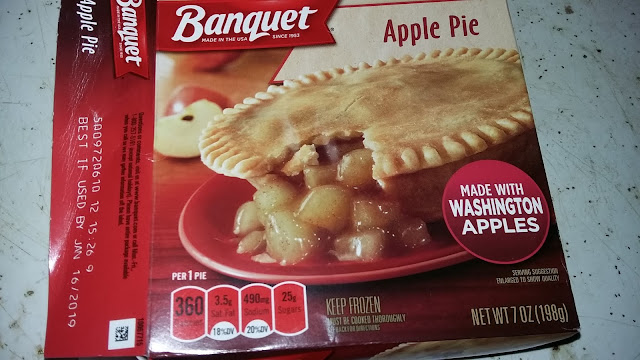 My wife had to run out to Wal-mart a couple days ago and, while she was there, went into the freezer section. She came across these pies and decided to pick up a couple of them for us to have for dessert.

I think I've had these pies in the past but, when she brought this home, I couldn't remember what I thought of them. I finally got around to trying it again last night and, overall, I have to say it wasn't too bad. While this single-serving frozen pie wasn't the best apple pie I've ever had, it did have some things going for it.

For one, I liked the convenience. The pie stayed in the freezer until I was ready for it and then all I had to do was pop it in the microwave. A few minutes later, I was eating it. That is definitely a lot more convenient than baking something like this in the oven.

As far as taste goes, it was acceptable. The apples were a little sweeter than I prefer but were OK and, at minimum, was better than some other frozen pies I've tried.

There was also quite a bit more apple filling than I was expecting. I figured the pie would skimp on that but it was filled quite nicely and that made the dessert much more filling as a result.

Final Opinion: As I said before, it wasn't the best apple pie I've eaten. But, especially when the convenience is factored in, I do think it was worth the money my wife spent on it.