Book Review: Death on the Nile by Agatha Christie (1937)

June 26, 2018
Synopsis: Jacqueline de Bellefort is in love with Simon Doyle and intends to marry him. When her former fiance decides to marry her rich and beautiful best friend, Linnet, instead, she becomes obsessed with ruining things for the newlyweds and follows them on their Egyptian honeymoon.
When Linnet is found murdered, Jacqueline is naturally the primary suspect. But, when she is immediately cleared of the crime, it is up to the vacationing Hercule Poirot to figure out who else had motive to kill her. 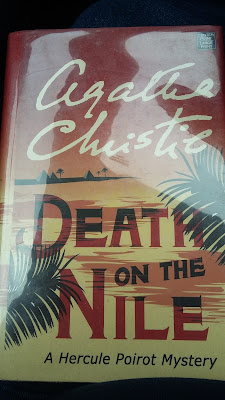 Review: It took me a little longer to read this book than it normally does, mostly because I didn't have as much free time the past few weeks as I normally do. I finally managed to finish this book this morning.

To tell you the truth, I figured out who was responsible for Linnet's death (and, later, a couple other murders) about halfway through the book. This wasn't because of any specific clue or anything like that. Instead, Agatha Christie tends to re-use certain concepts/patterns in her books and I figured out who the killer(s) was solely from noticing one of those. That being said, this book still proved to be a good read.

Even though I correctly figured out who killed Linnet (who may or may not have had it coming, depending on your point of view), I did, admittedly, have some trouble figuring out how that person did it. This is because, while my theory made sense (and, again, I was right), there was also a lot of evidence that made my theory seem impossible without the help of a yet-to-be-identified accomplice. This is especially true of an earlier attempt on Linnet's life that needed further explanation because my suspect couldn't have done it.

Also, as is often the case with Christie's novels, there was more than one crime that needed to be solved. In addition to Linnet's murder (followed by two others), there was a case of theft involving a pearl necklace and reports of another murderer already hiding among the guests who may or may not have had anything to do with the other crimes. This meant, even if they weren't the killer, just about any of the guests could be guilty of something. That, alone, would have kept this book entertaining enough to keep reading.

Final Opinion: If you've read enough of Christie's novels, you'll probably have no problem figuring out who the killer is. But, there's still enough mystery (including how the person did it) to keep the book from becoming boring and I would recommend reading it regardless.