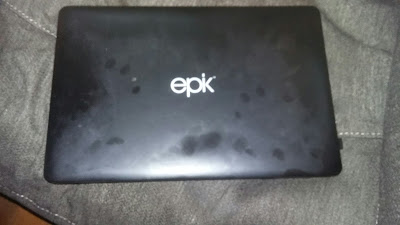 The cats spilled a glass of water on my laptop about a year ago and, when I realized the incident damaged it beyond an affordable repair, I opted to find a replacement for it. I was on a bit of a tight budget at the time and couldn't spend too much money and wound up purchasing the lower-priced Epik ELL-1401 as the replacement.

I honestly wasn't expecting this laptop to do anything that really stood out. In fact, the only reason I made this purchase is the laptop had a lower price and I figured I wouldn't do enough on it to justify paying more money. After having it about a year, I now realize I couldn't have been more wrong about this waste of money.

I will start out by saying this worked OK for a few months. It wasn't anything overly special but, while I did miss the previous laptop, I was able to work around the noticeable flaws, such as a smaller keyboard and screen. However, it really didn't take me too long to regret this purchase.

My biggest complaint about this laptop is the lack of memory. As I said before, I really don't do a whole lot on the laptop. I mostly just write, visit a few web sites and occasionally upload some photos (which are then transferred to a flash drive). Based on that, even though 32 GB didn't seem like a ton of memory, I thought it would be enough.

That, however, was not the case. As it turns out, the various Windows 10 updates pretty much used up all of that memory and, eventually, I found I had a hard time getting this to boot up because it would be trying to load the latest updates and, because there wasn't enough memory  left to do that, would have issues.

I tried to solve this by turning off the automatic updates but, for some reason, the laptop would just reactivate them on its own. Then, when I tried to just start over and do a full restore (figuring I already had the necessary files saved), I couldn't even do that because there wasn't enough memory left.

And, if that wasn't bad enough, seemingly to add insult to injury, the battery decided to die on this laptop. This, in itself, wouldn't be that big of a deal (it's not the first time that has happened to me). But, there is no way to replace the battery in this laptop without taking it apart first and that was one added inconvenience I was not a fan of.

Final Opinion: The dead battery was pretty much the last straw with this product and I have purchased a replacement for it. I thought it was a good deal when I bought it but the lack of memory, among other things, made it a mistake. I don't recommend it.