May 17, 2018
Synopsis: An African missionary dies at the start of World War I and, even though they didn't directly cause his death, his sister, Rose Sayer, blames the Germans. Left alone in enemy-occupied territory, Rose accepts passage on a river boat, The African Queen, which is piloted by a fellow British citizen, Charlie Allnut. Upon learning the boat, which had previously been used to deliver supplies to a mine, carries explosives, she convinces a reluctant Allnut to take the boat down the dangerous Ulanga River so she can use the vessel to sink a German gunboat. 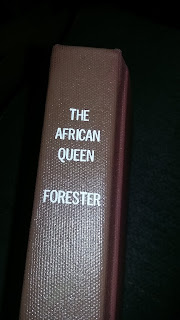 Review: I started reading this book some time ago and was finally able to finish it before going to bed last night. Normally, I can get through a book of this size in about a week. This time, it took me considerably longer because, in all honesty, I was having a very hard time staying interested.

I've seen the 1951 movie version of this book on more than one occasion and, while it is an OK film, it isn't on my list of favorites. I decided to finally read the book because, most of the time, the book ends up being considerably better than the movie. This, however, was not the case. In fact, this is one of the rare times when the movie version of the story, simply from the need for heavy editing, is considerably better than the print version.

My biggest complaint about this book is the same one I have about the film, the main characters are interesting and there's an intriguing love story between the two of them. But, other than that, there's really not much else.

Let's put it this way, for a book that takes place during a war, deep in the jungles of Africa and within enemy territory, there's very little action. The bulk of the book consists of them floating down a river, occasionally dealing with rapids, mosquitoes and boat repairs. When they aren't having sex, they are eating, drinking tea or gathering firewood. They are only shot at once, and even that isn't until they are already out of danger. Not to mention, the supposedly brutal German commander, Von Hanneken, is referred to often but never actually plays any sort of role in the story.

Even the ending proved to be dull. The ending in the movie was a bit predictable but there was at least an attempt to add some suspense. That is definitely not the case with the book, which had an anticlimactic ending that left a lot to be desired and left me feeling a bit cheated.