April 01, 2018
Even though the weather was less than ideal yesterday, my wife really wanted to get the girls' picture taken with the Easter Bunny so we ended up making a trip to Madison and the East Towne Mall.

It had been a while since we had been there and we noticed they added some new restaurants to the food court area, including Lulu's 13 Pub. We had never heard of this particular restaurant before but, when we realized the Easter Bunny gave the girls coupons for free kids' meals, we decided to give it a try.

To tell you the truth, I was a bit surprised to see this kind of restaurant in the mall food court, partly because it had a bar. But, after eating there, I have to say I was very impressed.

While I was somewhat tempted to order one of their breakfast entrees, I ended up ordering the mushroom Swiss burger. This ended up being a good choice. The burger was larger than some others I've purchased for about the same price and, with the homemade chips I ordered with it, was very filling as a result. I also thought it had a good flavor to it. 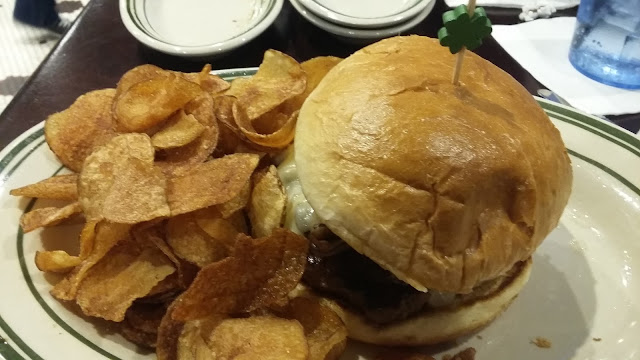 The menu item I thought was the most memorable, however, was their turkey and wild rice soup. I ordered a cup of that to go with the burger and, to paraphrase Bill and Ted, it was most excellent. It was also very filling and I wound up sharing it with my wife (who also loved it) just so I wouldn't fill up on it before having the main entree. However, I liked it so much, I probably will end up ordering a much larger dish of it the next time we eat there. 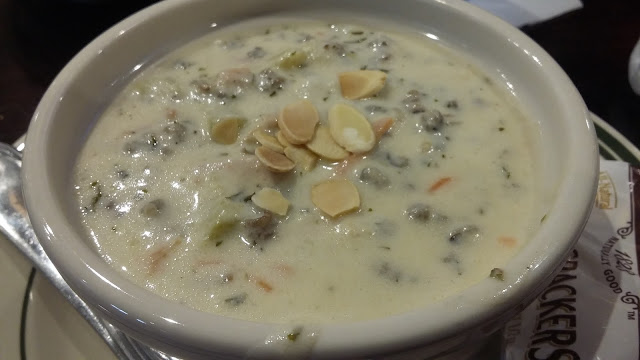 Final Opinion: This was an unplanned lunch yesterday. But, I thought this restaurant had decent food at a reasonable price and I would recommend trying it as a result.