April 09, 2018
Synopsis:  Private detectives Sam Spade and Miles Archer are hired by a beautiful woman to follow a man named Floyd Thursby in an effort to find her sister. When Archer is killed that night and, a short while later, Thursby is also found dead, the police begin to suspect Spade of one or both of the murders. In an effort to clear his name, Spade investigates his client further and is drawn into a case involving a rare falcon statue that is valuable enough to get people killed. 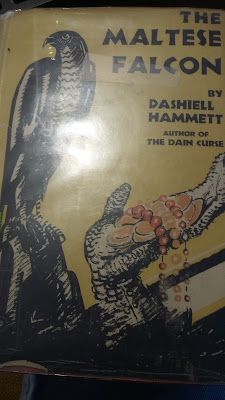 Review: I decided to take a short break from Agatha Christie and asked our local library to dig this book out from its archives.

I have seen the Humphrey Bogart movie based off of this novel. However, it's been several years and I didn't remember too much about the film or its plot (other than Bogart's chain smoking). And, as a result of that, I started reading this book with no real idea about what it was about. As it turns out, it was a good read.

I think the thing I liked most about this book is the large number of shady characters. Everyone from the guy in pursuit of the falcon, Casper Gutman, to Spade's client, Brigid O'Shaughnessy, seemed to be doing their best to keep something hidden from Spade. Because of that, it was unclear who he was able to trust and who would put a bullet into him if the situation called for it.

Even Spade himself wasn't completely clean. There were times when I began to suspect he was the one who killed his partner, both because it was pretty obvious the two men weren't on the best of terms and because he didn't completely deny a romantic interest in Miles' wife. I kept waiting for him to confess to the crime at some point as a result.

Despite the complex plot, the book was surprisingly easy to follow. This isn't always the case with books like this one. Some of them are a little too complex and its hard to keep track of who did what. The fact this book was easy to keep up with made it much more interesting because, as Spade got cornered on more than one occasion (both by the bad guys and the police who were looking to arrest him for murder), it did make me want to continue on just to see how he got out of those situations.

I especially liked the ending, which, over the course of a few chapters, had Spade looking like he wouldn't survive the night, only to gain the upper hand then lose it again and, finally, have the book reveal what really happened. It was definitely something I enjoyed reading from front to back as a result.

Final Opinion: I don't remember much about the movie, but I do think the book was better. If you haven't read it, I would recommend it.