Book Review: Cards on the Table by Agatha Christie (1936)

April 30, 2018
Synopsis: Detective Hercule Poirot is invited to attend a dinner and bridge party thrown by Mr. Shaitana, who has suggested four of his guests have once gotten away with murder. When the host is murdered during the course of the night, suspicion falls on one (or more) of the four he accused of murder. It is up to Poirot, with the help of Superintendent Battle and two other sleuths, to figure out who is responsible and what secret they were trying to keep. 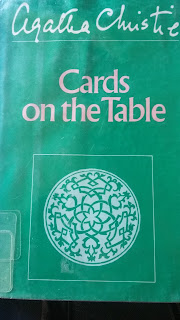 Review: I picked out this book a couple weeks ago because I knew, with my daughter's ice show being held last weekend, I would be at the ice rink quite a bit and needed something to keep me from being too bored.

As it turns out, I was too busy helping out at the rink most evenings to get through this book as fast as I was expecting to. But, I still managed to find time to get through it and, after finally finishing it last night, I found I wasn't as impressed with it as I had hoped to be.

The mystery itself had some potential. There were four primary suspects with an opportunity to kill the host. All of them (supposedly) had committed murder in the past, giving them all a motive for wanting him dead. But, at the same time, there were no witnesses and, since they were all good at keeping secrets, no easy way to determine who did it.

I think my biggest problem with this book is it was in desperate need of a surprise twist. When I started reading it, my first thought was "just four suspects? That's too easy." And, because of that, I kept waiting for Poirot to reveal one or more of the people in the room with the victim was a red herring and one of the "good guys," like the crime author Ariadne Oliver, was really one of the murderers Mr. Shaitana was referring to and the person who killed him.

That, however, never happened. And, as it became more and more clear the killer was, in fact, one of the four people playing bridge in the room, I honestly lost interest. Sure, Agatha Christie tried to keep things interesting by having someone confess and another character look guilty only to reveal the real killer at the last minute. But, since they were all guilty of something anyway (meaning there was no threat of an innocent person being sent to prison), it just didn't have the same impact as some of her other mysteries.

Final Opinion: It's an OK mystery. But, compared to some of her other novels, I thought it lacked something and can't call it one of my favorites as a result of that.