March 21, 2018
Our daughters finally didn't have to be at dance/skating last night so, in the interest of getting to our much-needed couch/TV time as soon as possible, I stopped at the store in search of a simple dinner for two for my wife and me. After some consideration, I ended up picking up this product from the Michael Angelo's brand. 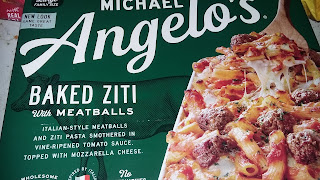 I picked this item out primarily on price and, because it was affordable (less than $7), I really wasn't expecting too much from it. As it turns out, it barely met those lowered expectations.

Since my wife was going to be home a couple hours before me, I asked her to follow the oven instructions for this item, mostly because they were the ones that were recommended. As far as that goes, preparing this was simple enough. All she had to do was preheat the oven, remove the pasta dish from the box and bake it for a little less than an hour. It was done a few minutes after I got home. 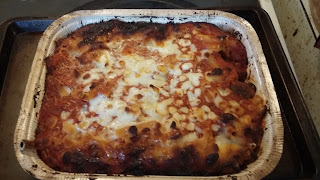 Unfortunately, the overall quality really didn't live up to the convenience. The pasta dish was very bland and it was obvious it came from a box. Knowing I could make this from scratch for roughly the same price and only a little bit of work didn't help matters.

On top of it, the meatballs were very hard to find in this dish. I'm not saying it didn't have any. But, with the exception of one or two, they were all thrown into one small corner of the pasta and I didn't discover them until I was putting the leftovers away. Since they were probably the best part of this dinner (and that's really not saying a lot), I was definitely disappointed by that.

Final Opinion: It wasn't the worst frozen dinner I've had, but, as I said before, it barely met my lowered expectations. I would only recommend it if you find it on sale as a result of that.