March 29, 2018
Synopsis: A nurse, Amy Leatheran, is hired by an archaeologist, Dr. Erich Leidner, to care for his wife, Louise, while he and his team dig for artifacts in Iraq. She soon learns Louise is living in fear because of anonymous letters she believes are related to her first marriage to a German spy.

At first, Amy doesn't believe her patient because she believes the letters might have been written by Louise herself, either from guilt or an effort to get attention. However, when Louise is murdered, it becomes apparent Amy and Dr. Leidner were wrong and Hercule Poirot is brought in to help solve the crime. 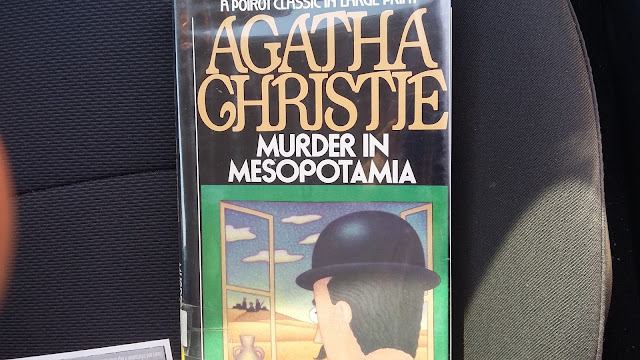 Review: When I went to the library a few days ago, I had intended on taking a short break from Agatha Christie. However, the book I wanted to check out wasn't on the shelf and, since I really didn't have time to search for it (or ask for help from the librarian), I wound up checking out this book instead.

And, to tell you the truth, when I first started reading this book, I honestly wasn't sure if it was one I was going to enjoy. This is mostly because it was a murder mystery that starred Hercule Poirot but, at least for the first several chapters, there was no murder and no Poirot and I was beginning to wonder if the book had forgotten to include either of them. However, as I continued reading, I found I did enjoy this book and would definitely list it among my favorites by this author.

A big part of the reason for that was the mystery. I love classic "who dunnit" murder stories and this one certainly qualified.

I think the best part of this book was the fact just about everyone could have been the killer. Louise was a strong, independent woman who was quick with an insult and liked flirting with other men, even if they were married. This caused a lot of animosity and gave every archaeological team member a potential motive for murder.

On top of it, there were quite a few new team members, something that meant the killer could be her ex-husband (who she would not be able to recognize after 15 years) or someone related to him. This meant the motive could be related to her past or that could just be a smoke screen and she was killed for something totally unrelated.

Adding to the mystery was the fact Louise was killed in a room that had only one well-observed entrance, something that would make it seemingly impossible for someone to sneak in on her. As a result of that, even though I was able to figure out who killed her and why, I wasn't able to answer how that person did it until Poirot revealed it. This made the book enjoyable until the very last page.

Final Opinion: As I said before, it wasn't my intended reading choice. But, I am glad I read it and would recommend the book as a result.