February 16, 2018
Product Description: Frozen chicken and vegetable dumplings from the Bibigo brand. The dumplings are prepared in the microwave in a special steaming tray. I purchased a box of 36 dumplings for $7.99 while shopping at Costco this past weekend. My wife and I made a tray of the dumplings to go with our dinner last night. 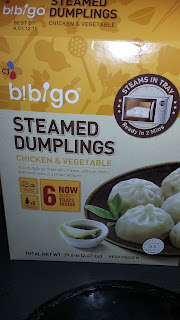