Proud of My Wife

February 13, 2018
My daughter is competing at the Pettit Center in Milwaukee this upcoming weekend and needed a new skating dress because she is outgrowing the one she already has.

We looked at buying her a dress. But, since they can run in excess of $300, my wife decided to buy the material and just attempt to make her one instead (something she's done in the past but it had been a while).

She started it last week and, despite a variety of issues, including her sewing machine not working (forcing her to use her new serger instead), finished it yesterday. 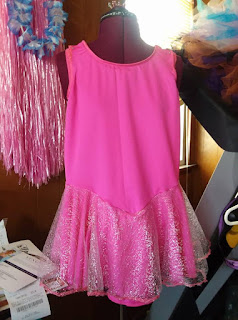 Total cost for materials was about $35, making it much less expensive than most of the pre-made dresses we were looking at. She eventually wants to attempt something a little more complicated, and has even sketched out the design, but that will have to wait until summer, when she has more time.

In the meantime, this one will work just fine, both for this weekend and another competition the first weekend in March. The only thing that needs to be done is my daughter has to test it out (something we plan on doing tomorrow evening) to make sure there isn't anything that will cause a wardrobe malfunction on Sunday.