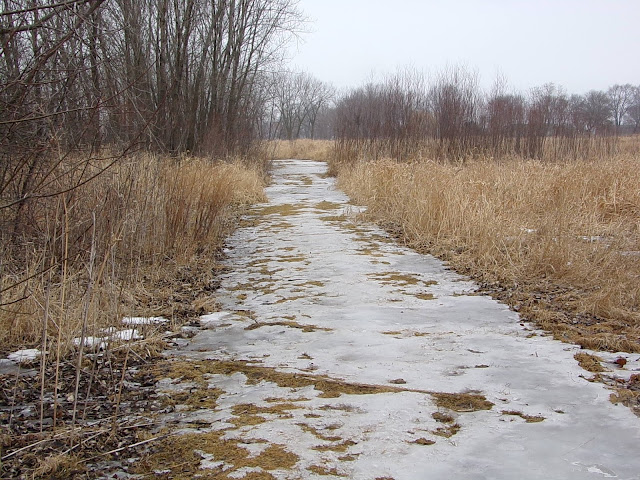 It was colder than yesterday with a bit of overcast and I considered not going for a walk at lunch today as a result. But, March is expected to come in like a lion tomorrow with winter weather so I figured I would squeeze it in while I still had an opportunity.

Overall, the walk was a bit of a bust photo-wise. I heard a cardinal and plenty of other birds (including a woodpecker that sounded like it was using a jackhammer) but they stayed pretty well hidden the whole time I was out.

On top of it, I had to maneuver around ice-covered trails like this one. I foolishly attempted to continue down this trail. By the time I realized I made a horrible mistake, I was already past the point of no return and had to carefully continue forward because going back was just as (maybe more) risky.

But, on a positive note, I managed not to fall or throw out a hip. And, I didn't have to worry about mosquito bites or ticks.
hiking ice nature outdoors trails winter
Location: Edgewater Park, Beaver Dam, WI 53916, USA