Well, I Had One Number on the Powerball Last Night 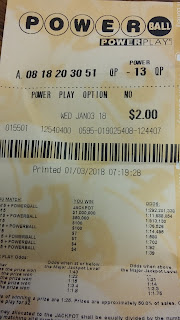 I very rarely buy lottery tickets, mostly because I rarely have cash on me and, when I do, I try to hold onto it as long as possible. However, the jackpot on the Powerball has reached a high enough number where I felt investing the $2 I won on a scratch off (a Christmas present) wouldn't hurt.

Predictably, I didn't win anything. I checked the numbers earlier today and I had one (the number 18).

The ironic part of it though (which is also a bit sad) is having one number drawn is officially the closest I've ever come to winning the jackpot. Up until this point, I don't remember ever purchasing a lotto that even had that many numbers drawn.

In other words, you would be wise not to ask me to pick lottery numbers for you.
lottery lotto numbers powerball powerball drawing powerball tickets