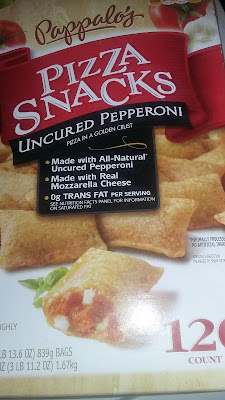 I came across this product while shopping at Costco late last month, when it happened to be next to another item I had planned on buying. Since it sounded like something I would eat and was only $8.99 for 120, I decided to make the purchase.

Even though I liked the price of this item, I did have some doubts about it when I put the box in my cart. While this might seem like something that would be hard to screw up, I've had a few similar products (mostly bargain brand) that were actually quite disgusting. And, because of that, I honestly wasn't sure if I was getting a great deal or wasting money on something I wouldn't enjoy. As it turns out, it was a good purchase.

I actually forgot I even had these until coming across them in my freezer yesterday morning. I decided to have some for lunch and was actually pretty impressed with them.

I don't hate pepperoni, but it normally isn't my favorite option either. However, this pepperoni had a decent taste to it. It had enough of a kick to keep the pizza snacks interesting. But, at the same time, it wasn't overly spicy. At minimum, it was as good as similar products from more familiar (and more expensive) brands.

One thing that surprised me about these was how filling they were. I didn't make too many to start because, again, I wasn't sure if I would like them and didn't want to end up throwing a whole bunch of them in the garbage. However, as it turns out, even after discovering I liked them, I found I didn't need to make more. The few I made were more than enough to fill me up. This means I'll be able to get more meals out of these, adding even more value to my purchase.

Final Opinion: It's a good brand with a decent flavor and a reasonable price. I would purchase this again.