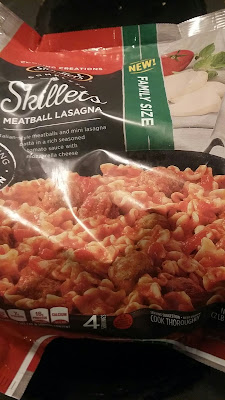 The first half of our week was a bit hectic, with everything from the normal skate/dance lessons to a school concert. And, because of that, I kept my eyes open for food items that were easy to make for dinner.

When I first saw this particular product at one of our local grocery stores, I had to think it over for a while. This is because, while it looked good (and convenient), one bag was almost $10. This seemed to be a bit on the pricey side, to me at least, even though it was advertised as a family-sized meal (which is always a matter of opinion). However, after having it last night, I do think it was a decent purchase.

While I'm still undecided if it was really worth the money (mostly because I could have made my own for around the same price), this product did have some things going for it. One of the big ones was it was as convenient as I hoped it would be.

Making this skillet lasagna was easy. All I had to do was poor the contents in the skillet and cook it for about 20 minutes, stirring it on occasion. Considering I've had plenty of similar products that require you to cook the meat separately, thaw out the sauce under hot water, etc., I was definitely happy about how easy this was.

The lasagna also had an OK flavor to it. It wasn't as good as homemade. But, a lot of products like this will tend to go a bit overboard with the spices. This one didn't do that. It probably could have used a little more garlic but the overall taste was passable.

I was also somewhat impressed by the quantity of meatballs in this lasagna. When I purchased this, I figured we would be fighting over three or four meatballs. But, there were at least a dozen in the bag. This did end up making it more enjoyable, and more filling.

Final Opinion: This is kind of expensive and, as I said before, I'm still a little undecided if it was worth the money. However, the convenience, flavor and, of course, meatballs, did make this an enjoyable meal I would consider buying again.