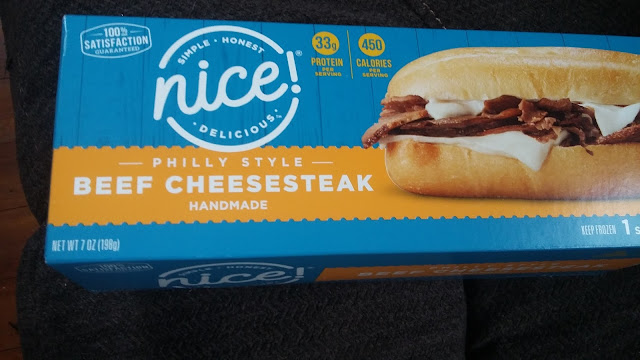 My wife needed to run up the street to Walgreen's yesterday for some packing tape and, while she was there, decided to pick up something for lunch. She visited their freezer section and brought this product home for me.

To tell you the truth, I wasn't really sure what to expect from this. I've had similar frozen sandwiches in the past and they have very rarely turned out well. But, since she purchased it for me, I felt obligated to give it a try. After doing so, my opinion of it was mixed.

Let me take a moment to mention this sandwich offered a couple different ways to heat it up. One of them, the oven, was the preferred way and there's a chance my opinion of this product might have been a little better had I used that method. But, I also wasn't interested in waiting 15 minutes for the oven to preheat just so I could make this sandwich and I ended up using the most convenient method, the microwave, instead.

As far as the beef itself goes, I had no complaints. I thought the shredded beef had a good flavor to it and the quantity exceeded my expectations. It was easily the best thing about the sandwich. Unfortunately, it was also the only good thing about it too.

While there was plenty of beef, the cheese was lacking in terms of quantity. Let's just say the picture on the box is very misleading in that category and I did consider adding my own cheese to the sandwich to compensate for that.

Also, the bun came out exactly as I expected it too. As is usually the case with frozen sandwiches like this, the bun was a bit slimy the touch and tough to chew. Again, this might have been different had I used the oven. However, I'm not sure it would have been enough of an improvement to justify the added inconvenience.

Final Opinion: It wasn't necessarily a terrible lunch, especially since the beef was really good. But, I had lowered expectations when trying this product and it failed to surprise me.