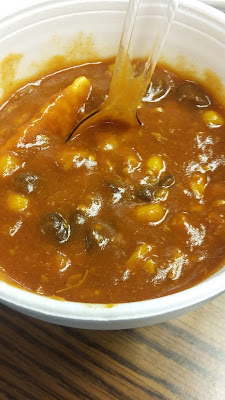 I am fighting a bit of a cold right now and decided to run up to Kwik Trip and grab a hot cup of soup to help me get through the rest of my day (I really need a couple days to rest, but that's just not going to happen anytime soon).

As it turns out, they were running low on their soups and, even though it wouldn't normally be my first choice, I decided to try this one simply because it was the only one that had enough left to fill the cup. After trying it, I have to confess I'm not that impressed with it.

This surprised me a bit because I've had most of the other Kitchen Cravings choices and was always happy with my purchase. This soup, however, really didn't live up to my expectations.

I think my biggest complaint about this soup is it is very bland. Chili doesn't need to be 3-alarm spicy. But, I do think it needs to have some sort of kick to it. This didn't meet that criteria at all and was definitely missing something (or multiple things) to bump it up to the same level as the other soups I've purchased there.

Also, while this is described as a chicken chili, I really didn't think there was enough meat in it to justify being called that. There were plenty of beans and corn but I found very few noticeable chicken pieces in my 16-ounce cup (and I scooped from the bottom).

I did end up finishing what I purchased. But, I really don't think this is a product I would buy again.