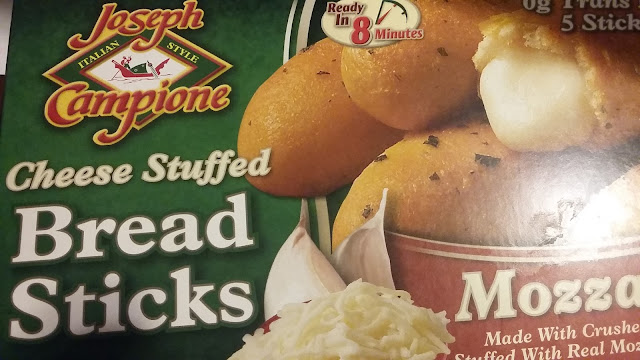 While my wife was already at the store picking up some pasta sauce for our spaghetti dinner a couple days ago, I asked her to pick up some garlic bread to go with it. Since our youngest daughter likes cheese-stuffed bread sticks (she'll eat 2 or 3 of them by herself), my wife ultimately picked up this product.

She made this purchase primarily on price, she was trying not to spend too much and picked out the Joseph Campione brand because it was the cheapest. After having the cheese-filled bread sticks with dinner, my opinion of them were a bit mixed.

The best way to describe these bread sticks is they weren't bad, but they also weren't the best brand we've ever purchased (and that statement includes some brands that were comparable in price). The bread sticks had an OK blend of seasonings and there was definitely some cheese in them (though not as much as shown on the box). But, like most budget brands, there wasn't much about them that really stood out.

Also, like some other brands I've seen (and complained about), these had way too much butter on them. The bread sticks were coated in butter to the point I was almost afraid to touch them (a necessity because they needed to be separated before putting them on the pan) because I knew my fingers would feel slimy even after washing my hands afterwards. It also made the cooked bread sticks almost greasy and even my youngest daughter (who absolutely loves butter) was complaining about it. And, to be honest, that alone is something that would make me think twice about buying these again, even if they are the cheapest choice.

Final Opinion: As I said before, they weren't necessarily bad bread sticks. But, considering the savings was relatively small (less than $1), I really don't think the lower price would compel me to buy this brand over a more expensive one I like better.