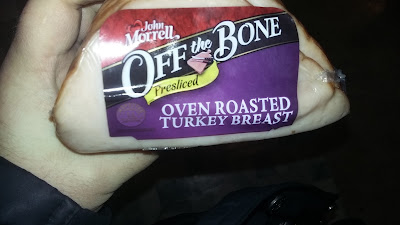 Since last night was skate lesson/dance lesson night for our daughters, I once again stopped at the grocery store in search of something I could throw in our slow cooker. I originally planned on grabbing a small ham. However, Christmas is just a few days away and, since we'll be having ham then, I decided to pick up this product instead.

To tell you the truth, I wasn't really sure I wanted to buy this product when I first saw it. This is because the small amount of turkey inside that package was more than $8. But, I was in the mood for something a little different (and easy to make) so I decided to splurge a bit and get it. Unfortunately, my opinion of the product was a bit mixed.

As far as preparation goes, this definitely fell into that easy-to-make category. All that needed to be done with the turkey was heat it up and, because of that, all I needed to do when I was home at lunch yesterday was put this in the slow cooker with some potatoes. Dinner was ready by the time I got home yesterday evening.

There was also more turkey in the package than it first seemed. We ended up having more than one serving each and there was still plenty of leftovers. This did make the price a bit more palatable because we'll get more than one meal out of it.

Also, unlike some other meats I've purchased, this didn't seem to have a lot of fat in it. There were some juices in the bottom of the slow cooker but not a ton of grease (something that is always a bit of a turn off when it comes to food).

My only real complaint with this product is, even though it was supposed to be turkey, it really didn't taste like turkey. It actually tasted a whole lot like ham. In fact, up until the time I told my wife differently (and proved myself by showing her the packaging), she believed it was ham. While this isn't necessarily a huge deal, I did, if you remember, purchase this product specifically because I didn't want to have ham so close to Christmas. So, I was a bit disappointed in the flavor as a result of that.

Final Opinion: I thought it was a good value because of the quantity and convenience. However, the ham-like flavor was a bit of a disappointment for me and I'm not sure if I'll buy it again as a result of that.