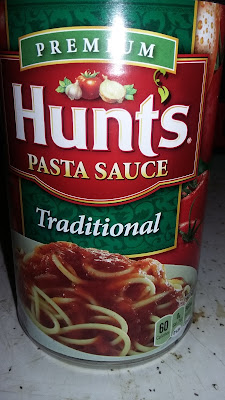 I decided to make ravioli for dinner last night and had to stop by the store for some sauce. This brand happened to be on sale for $1 per can and I ended up buying it as a result.

This is not the first time I've used this sauce. In fact, even though I do try other brands, I usually end up coming back to this one.

There are a few reasons for this and one of the main ones is the price. Even when the sauce isn't on sale, I can usually find it for less than $1.50 per can. While not significantly lower in price than other sauces, it's enough of a savings to consider it when my grocery budget is a bit tight.

The sauce itself is also decent-enough. It has a good blend of seasonings so I don't have to spend a good chunk of time doctoring it up (as is often the case with some other bargain-priced brands).

It also has a good thickness to it. It's not chunky like some other (more expensive) jarred sauces. But, it's also not watery (like most bargain brands) and is fine whether I use it alone or if I add hamburger, meatballs and/or mushrooms to it.

Also, even though I probably shouldn't be by this point, I'm usually surprised by the quantity in the can. I usually end up purchasing two cans of this sauce because I am never sure if we will have enough. But, more often than not, I'm able to put the second can in the pantry for later use. Considering I'm not able to do that with many jarred varieties, it does add to the overall value.

Final Opinion: I won't say it's the best canned/jarred spaghetti sauce I've ever had. But, both because of the price and the relatively decent quality, it is a brand that is worth purchasing, especially if you are on a tight budget.