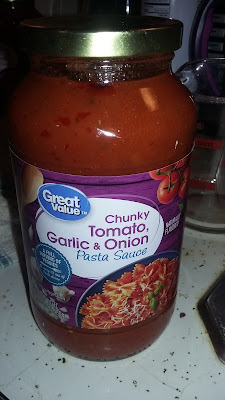 I was in the mood for spaghetti yesterday afternoon so I asked my wife to pick up some pasta sauce, both because she was already at Wal-mart and because she is much more likely to take a chance on a variety we haven't tried before. When I got home last night, I found she picked out this sauce.

Even though I'm not opposed to trying new things on occasion, I did have some doubts about this sauce. This is mostly because, when I think spaghetti, I don't really think of onions and I was concerned this sauce would have too much of a pungent flavor. As it turns out, however, it wasn't too terrible.

As I said before, I was hesitant to try this. But, once I did, I discovered the flavor was actually better than I was expecting. The onions blended in nicely with the garlic and the sauce, overall, had a light flavor to it that was noticeable but not overpowering. While I'm not sure if I would classify it as one of the best tasting jarred sauces I've tried, it definitely wasn't one of the worst either.

The sauce was a little thinner than I would have preferred and ended up a bit watery when cooked. However, since we added hamburger and mushrooms to it (as we normally do when we make spaghetti), it wasn't anything that I would describe as a deal breaker and I would mostly chalk that up to being a budget-priced product.

I will also say this, even though it was a thinner sauce, one jar (at least after we added the hamburger and mushrooms) did prove to be enough. We didn't need to open a second one, as we originally feared. So, it did have that going for it as well.

Final Opinion: While not my favorite jarred sauce, this product did exceed expectations and, at the right price, I would consider buying it again.