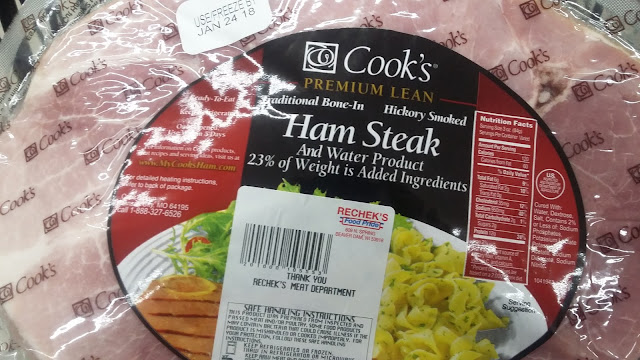 I decided to make some macaroni and cheese in the slow cooker for dinner a couple nights ago and, figuring it wouldn't be enough on its own, stopped at one of our local grocery stores to pick up some ham to add to it.

Since I was on a somewhat tight grocery budget, I decided to cut some cost by picking up a ham steak instead. While not quite as good as a regular ham, the fact I was able to buy this for less than $5 was something that made this purchase worthwhile and I figured, once it was mixed in with the macaroni and cheese, it would be hard to tell the difference anyway. As it turns out, it was a good purchase.

One of my biggest concerns with this purchase was whether or not the ham steak would end up being too salty. This has been a problem with similar products in the past and I was afraid it would end up ruining the entire dinner. However, before adding it, I took the time to sample it and this turned out not to be a concern. There was some saltiness, but no more than I would normally expect from ham (or something similar).

Also, unlike some other ham steaks I've purchased in the past, this one actually had some meat on it. I've purchased plenty of others that were more fat than actual ham and the fact this one was much more lean did make it more enjoyable. It worked well with the macaroni and cheese and it would be something that would have been a great dinner option on its own.

Final Opinion: Again, it wasn't quite as good as regular ham. But, it was good enough and, because of the lower cost was something I feel was worth my money. I would purchase it again as a result.