October 06, 2017
This is something I mentioned in a comment on another post but thought I would take a few minutes to elaborate on.

My daughter, as I mentioned in that post, had a fall during skating practice Wednesday night and, as part of that fall, hit her head on the ice. Fortunately, she suffered no (apparent) long-term injury from that. She had a bump on her head but has shown no signs of a concussion from her fall. But, the incident, along with the fact it is the second time she has hit her head on the ice, did prompt me to order her a Crasche band (a head band designed to protect skaters' heads) immediately after.

As I placed my order, I was reminded of a question I asked myself a while ago, why doesn't U. S. Figure Skating require all skaters to have some sort of head protection? 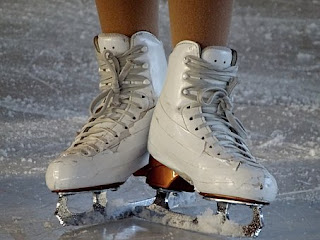 My daughter has been involved with the sport for a few years now and, from watching her and the other skaters, I've learned to appreciate just how challenging and dangerous it is. The skaters are asked to perform complicated moves with zero protection while on a sheet of ice that has no give. In fact, part of the reason why I'm usually the one at the ice rink with my daughter is her mother can't watch her practice without cringing.

Sure, the first lesson skaters are taught, even before they step onto the ice, is how to fall properly. But, that's not always going to happen. In my daughter's case, she caught a bad patch of ice (doing a move she's done hundreds of times) and was falling backwards before she had a chance to even react. I think the only reason she didn't get hurt worse is she, by pure luck, hit butt first and that slowed down her momentum before her head hit.

This is why the lack of a head protection requirement makes no sense. With concussions, CTE and other head injuries earning front-page attention in the media, USFS has an opportunity to be proactive and protect skaters, even if it's just at the student levels (when falls are more likely to occur).

And, I do feel this needs to be a mandate from USFS. Technically, skaters can wear head protection if they choose to. However, since costumes are still taken into consideration at competitions, wearing head gear can create a competitive disadvantage. If head gear becomes a requirement for everyone, it gives parents and coaches the opportunity to protect their skaters, both during practice and when competing, without that risk.

I had my wake up call Wednesday and will doing my best to protect my daughter's head going forward. But, until USFS has a wake up call too, many skaters will be continuing to put their brains at risk.