October 21, 2017
I had to stop at the store after work last night and had planned on just picking up something for dinner there. However, I just couldn't find anything that looked good and, because of that, my wife and I decided to just take the kids to McDonald's instead.

I've seen their Buttermilk Chicken Tenders advertised on television but, up until very recently, we weren't able to purchase them at either of our McDonald's restaurants (both had signs saying they were sold out). So, when I saw they finally had them, I decided to give them a try. As it turns out, they really weren't worth the wait.

I'll start out by saying the tenders came in a really awesome-looking box, which was both unique and practical (it had a slot for the dipping sauce). But, after trying them for the first time, I honestly feel that box was really the only thing special about them. 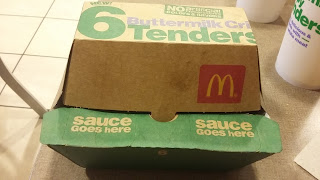 McDonald's, at one point, used to offer something similar to these and, compared to those original chicken tenders, I think these might have been slightly better. The buttermilk breading had a decent flavor to it and the tenders proved to be surprisingly filling (I ordered 6 and was only able to eat 3). 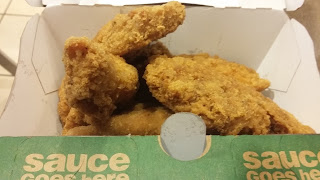 My biggest problem with these is, while the breading was OK, the chicken itself wasn't. The tenders were very fatty and kind of stringy (not to mention greasy), basically what I would expect from a low-quality chicken product.

The commercials advertise these as something your grandmother could substitute for her own homemade chicken. I, however, didn't notice any difference between these and the frozen chicken tenders I could purchase (for much cheaper) at any grocery store.

Since these did prove to be filling, I won't say I wasted my money on them. After all, when you dine at a fast food establishment, you should be willing to sacrifice some sort of quality. However, since, as I said, there wasn't anything that was overly special or memorable about these, I'll probably stick to a less-expensive menu item the next time we go to McDonald's.