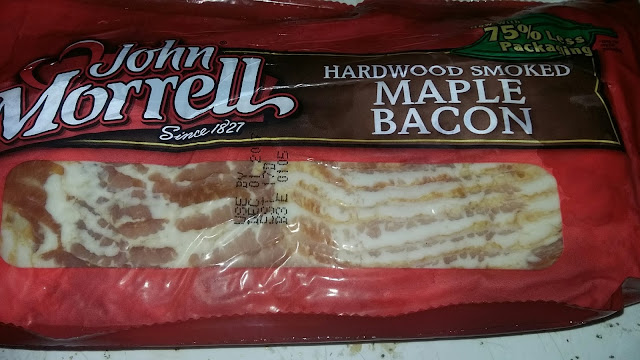 My wife was in the mood for BLTs on Saturday and, since I wasn't really in the mood to make anything more complicated than that (we had been running errands all day), I agreed. When we made the sandwiches, we used this product for the bacon component.

I had actually purchased this bacon a couple days earlier. It's not a brand I would normally buy. But, one of the local grocery stores had it on sale so I decided to pick up a package of it. After having it Saturday night, my overall opinion of it was a bit mixed.

The bacon did have a decent flavor to it. In fact, not only could we taste the maple flavor when we were eating this bacon, we could smell it when I was frying it up on the stove. So, as far as that category is concerned, I was happy.

However, when I started making this bacon, I also noticed it was very fatty, even more fatty than what you would expect bacon to be. And, predictably, by the time the bacon was fried up, it had shrunk down considerably. In fact, by the time it was cooked, I think there might have been more grease in the pan than bacon.

This was, admittedly, a bit disappointing because, while we liked the flavor, I ended up having to make the entire pack just to have enough for the sandwiches. In comparison, we could have had the same amount (after cooking) with only about a half of a pack from another brand.

As a result of this, I might consider purchasing this brand again if I found it on sale for a significantly-reduced price (as I did earlier this week). But, I don't see it as something I would purchase very often.